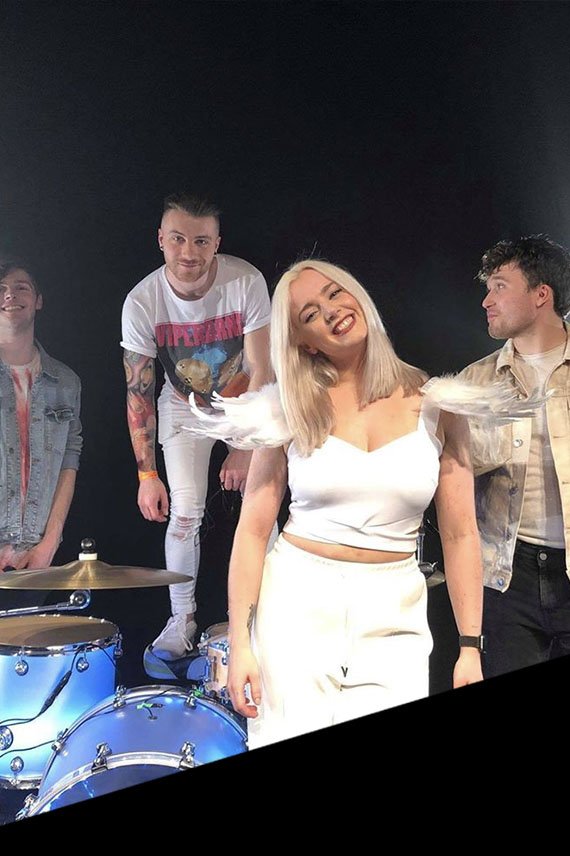 “100 Fables are already of one the best and most exciting live bands in Glasgow, tipped to be the ones to watch.” Vic Galloway BBC
With radio air play and superlatives flashing in all directions at the rebellious and exciting new indie electro punk darlings 100 Fables it is clear to see why the young Glasgow quartet has been receiving so much flushing adulation, which has extended way past the local scene and into a national stratosphere. Seeped in a caffeinated and luxuriously rich undertone of dirty electro beats, vocalist Lynsey Liora pierces through the discord with deliciously accrued harmonies, which reminisce of Karen O in the heart of a filthy neon Brooklyn dance floor in the late 80s, it’s really quite wonderful
The repetitive ramalama of Blink 182 and The Ramones mixes with the glorious synth pop of Blondie at the heart of 100 Fables’ music, but in the mix there’s the experimentation of Talking Heads, the theatricality of Arcade Fire and the festival-ready way with an anthemic chorus like The Killers and Panic At The Disco.
Devastating live, 100 Fables pack a right hook explosion of the ultimate theatrics, powerful tunes and leave audiences exhausted in their wake. Festivals like Belladrum, Kendal Calling, Isle Of Wight, Party at The Palace, The Grand Hall and Carnival 56, sold out hometown shows at King Tuts and the ABC2 and supporting the likes of Alabama 3, Glasvegas, Deacon Blue, Sheppard and Gun; anyone who was there will testify this is a band who leave absolutely nothing unanswered onstage and never have. Now, they’re ready to step it up to the big leagues. It’s only a matter of time before it happens.
2019 shows no sign of slowing down.