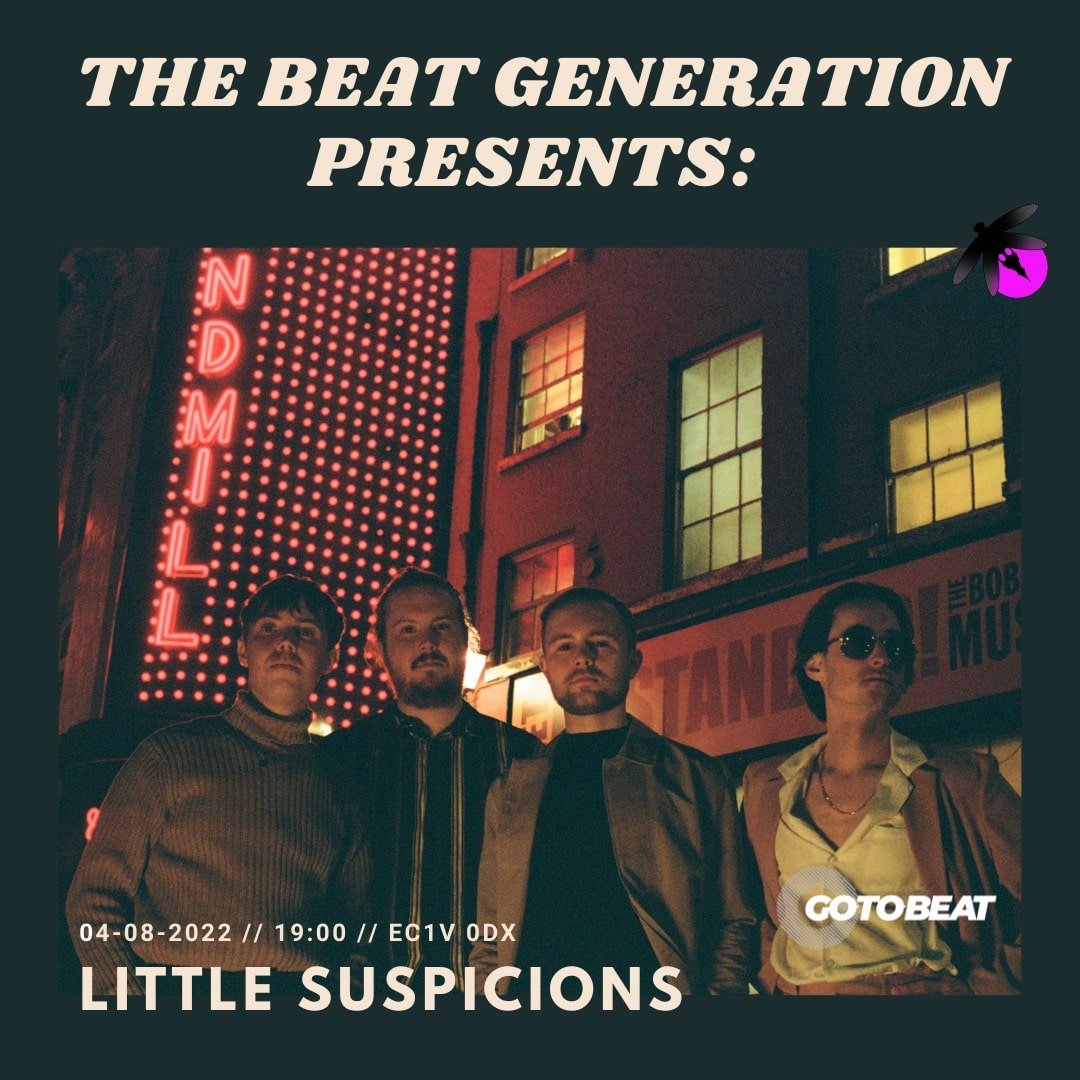 “Beat Generation”: A night all about the 60s, with Little Suspicions and more


A collaboration between the Fireflies of London community and Gotobeat.

History repeats itself, and we are not much different from those who were young in the 60s. The world is relatively calm but full of tension and our greatest wisdom stayed the same: make love, not war. We are the generation who is here to comfort Mother Nature, who is here to be loud about equality and empathy, we are the believers, we are the ones who start the new revolution of the spirit through art and music and poetry and great thoughts. We are them. We are us. We are Generation Beat.

Step into a night of spoken word poetry, visual arts, and music. It’s all about the 60s, where the new meets the old, where the shy meet the loud, where we bring an actual guest from the 60s and then dance to the music of those who got inspired by the decade.

Self-described ‘moody romantics’, Little Suspicions formed in February 2020 following a chance meeting between friends Joey Lyon and Conor Toner and vocalist Moritz Meyns in a London pub. Sharing a mutual love for Scott Walker, 60’s theme tunes and Dion, the trio began writing and recording songs in their Kent home analogue studio – with the later addition of bassist Craig Barden adding the final piece to the Little Suspicions puzzle.Whilst lockdown may have been a stalemate for many people last year, it gave Little Suspicions the time to write, record and grow. With infectious melodies and wrecking crew beats, the band quickly gained attention with their first two singles; nominated “Hot New Band” by Spotify UK as well as Fresh Finds on BBC Radio.

Aaron Dolby is a London based musical creative, inspired by the wisdom of nature. He will perform as a support vocalist with Gabor Kemeny.

Gabor Kemeny is a Hungarian pianist-conductor-composer who was a teenager in the 60s: his love for brit-pop music is just as strong as back then. He will travel the sea to come and play as the member of the original Beat Generation performing covers from the golden era.

Rosie O’Neil is a session vocalist and musician based in London. She specialises in Jazz, Pop and musical theatre whilst also covering a wide range of genres in her backing vocal work for artists. From performing at the Royal Albert Hall to recording in Abbey Road; Rosie is a diverse singer and player who is really looking forward to getting involved with the Beat Generation project and will be a support vocalist for Gabor Kemeny!

Nadia is a contemporary dance artist and spoken word poet based in London. She makes the audience connect deeply with the universe through her words and her performances. She will perform her poetry to embrace the spirit of the Beat Generation that she carries in her soul.

Aicha Thèrèse is a powerful spoken word artist, hailing from South East London. She encapsulates real life experiences into a raw and transparent spoken word style, creating mix-media work with physical art and literature. Aicha is also the founder of the poetry and music platform ‘ATL’s Word on the Street’ a monthly event showcasing live talent. She will perform her 60s inspired poetry pieces to celebrate the Beat Generation.

Gabriella Kemeny, the curator of the night is the founder of the Fireflies of London community which is a space for those who light up the city, whether they are poets, musicians, visual artists or creatives. She’s also a published poet, trying to focus on the journey. She will host the evening of the Beat Generation.