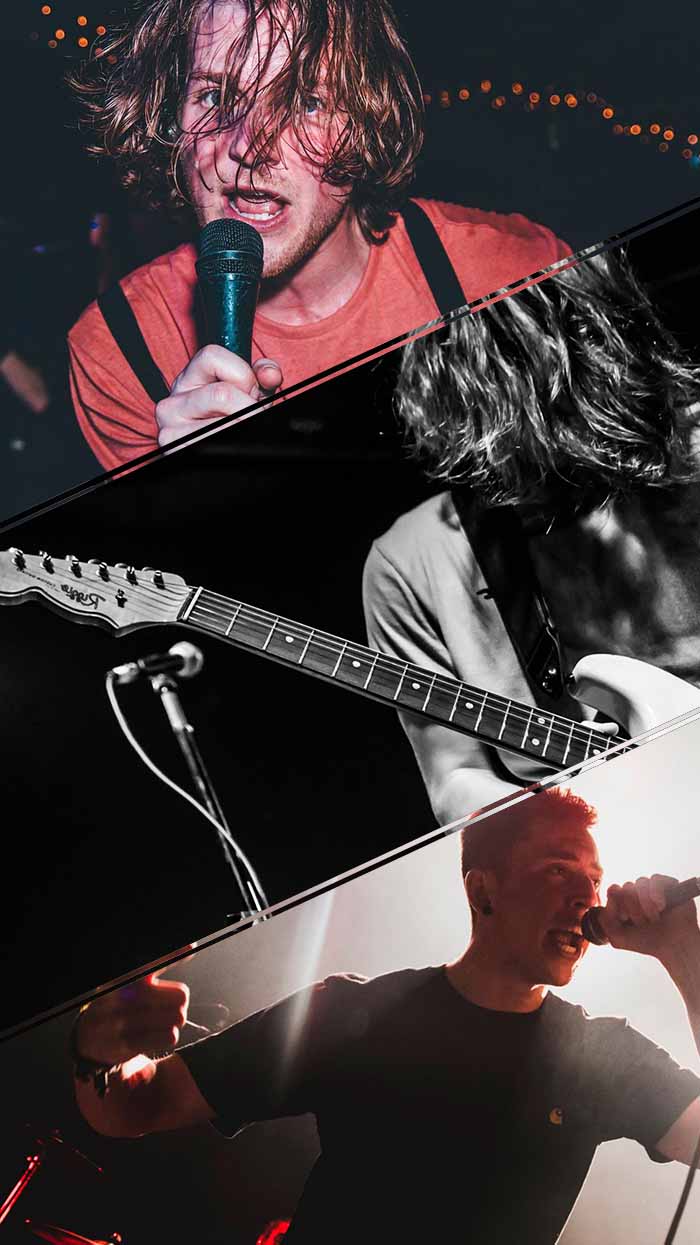 Jack The Envious is a Punk/Alternative band that fuses catchy melodies, with guitar driven songs followed by raw energy in their live shows.

Founding members Nir and Chuck met while serving as commanders in the Israeli army, where they bonded over their strong connection to music, and in 2016, the band released their debut EP (Pull You Down) followed by some very successful shows and a local critical acclaim.

In 2017, the band moved to London which followed by their 2nd EP (In Your Own Way) that also featured bonus tracks of the bands unique takes on the tracks “Wonderwall” and “Feel Good Inc.”

Not long after their 2nd release, the band started to tour the UK touring extensively, playing notable venues such as the O2 Academy, Scala, The Key Club to name a few.

After finishing their long touring cycle the band started working on their 3rd release (Bleeding Honesty), producing, mixing and mastering the album independently.

Blackstar Endorsed Artist, Kian was born in Northampton, England, to an Irish mother and English father.

Although he started playing the guitar at 7 years old, Kian’s first love was Rugby. At the age of 8, Kian was diagnosed with a very rare bone disorder in his foot which stopped him playing all sport, even walking wasn’t allowed for a year!

It was during this time his passion for the guitar truly started to grow.

Kian spent several years under the guidance of Anthony George back in his native England. Then a move to Washington State, USA, saw him elevate his skill set and creativity in both guitar playing and songwriting. Continuing his guitar lessons in the US took Kian to another level and further enhanced his playing abilities.

Today Kian has positioned himself as a bright up and coming guitarist that has attracted the eye of Seattle’s Ayron Jones and RCA recording artist, Steve Lynch from the band Autograph, not forgetting one of the world leaders in guitar amplifiers, UK based, Blackstar.

Hailing from Valence (FR), the French Pop Punk band Yvet Garden takes his influences from early 90’s band, the emerging UK Pop Punk wave and nostalgic Emo scene. This 5-piece-band mixes all of this with a drop of positive emotion to serve it in a cocktail of catchy & dreamy riffs which will bring you back to your best young years.

Yvet Garden is the reunion of 3 friends fond of pop punk music with the same enthusiasm of playing together.
These guys started as a 3-piece-band playing acoustic covers on Youtube with Rudy (Vocal), Jo & Flo (Guitar). From Blink-182 to Neck Deep going through Boston Manor, they challenged themselves by releasing one acoustic cover of their favorite pop punk bands every Thursday during several months.

Thanks to the engagement of people supporting this project, they decided to put their words and chords on their own songs.
It is time to grow as a full band in order to compose and create something bigger.

With the hiring of Max (drums) and Cyril (bass) from Malphas, the band managed to find its identity through everyone influences (90’s pop punk to new alternative wave through hardcore scene).
After 6 months of writing an EP on which they put their best, Yvet Garden recorded it at Alias Studio (with Bert & Eric from Chunk! No, Captain Chunk!) 5 tracks of various tones and themes that are composing «Twisted Tales ».

At the same time, Yvet Garden experienced their skills on stage where they defined their own way of enjoying this place. « Jumps, dynamism, balloons, monkeys… » are some terms they relate after their shows they did at Le Mistral Palace (Valence), La Cordonnerie (Romans), Jack Jack (Lyon), Le Transbordeur (Lyon), Le Bataclan (Paris), Le Backstage w/Mest (Paris) etc.

On September 21st, Yvet Garden will release their first single « Way Out » on their social networks; song that will be part of their EP « Twisted Tales » available in November.

January 2019 AAD released their debut album: “Tales from the Dirthouse”.
A story of losing loved ones and getting back on track again. The album contains 10 unique songs. Songs that address the entire spectrum of Alternative rock; quiet, modest, but also raw, loud and fast.
On stage the 5 piece band has an impressive performance. Whether they play a quiet song or a loud fast one, they will leave the audience breathless. Why? …….because what they do is beautiful, honest but most of all it’s real.

The band is influenced by bands such as Wilco, Radiohead, The Verve, The stone Roses, Yo la tengo and more.